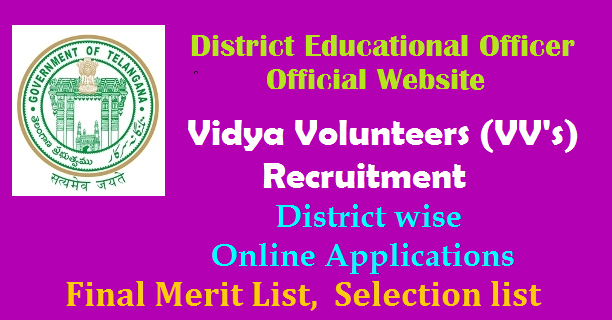 Medchal (Malkajgiri) District Vidya Volunteers (VV's) Recruitment Notification 2017:Telangana State government has decided to appoint 11428 Vidya volunteers for the academic year of 2017-18. The Chief Minister asked the officials to take immediate measures to appoint Vidya volunteers. According to Education department officials, the total teacher vacancies are raised to 11428 and these vacancies to be filled up with the VVs for 2017-18 with the increased honorarium Rs.12000/- (Rupees Twelve Thousand only) per month per month.

How to Apply for TS Vidya Volunteers(VV's) Recruitment 2017:
1.Candidate shall apply online and submit a signed print out of the application he / she uploaded along with the certificates required to the Mandal Educational Officer.
2. The Mandal Educational Officer shall cause verification of the applications with reference to the Certificates enclosed and submit to the District Educational Officer duly countersigned.
Note: Engaging of Vidya Volunteers in Agency area shall be from local ST candidates only.  If local ST candidates are not available ,then other ST candidate from Agency Area and later non-ST candidates residing in the Agency area shall be considered .

DEO Medchal (Malkajgiri) VV Merit List Online reports 2017:
Please note the reports generated is tentative.And
1. The List displayed is not final and is subject to final confirmation
2. This List does not confirm appointment as VV but is subject to verification
3. The selected candidates List will be finalised based on the roster points