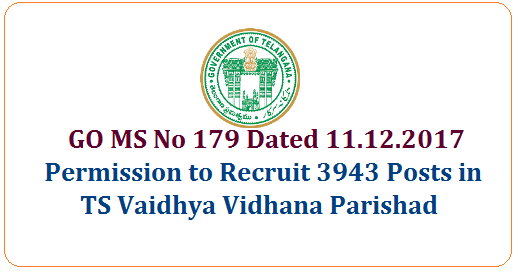 In the reference 2nd read above, the HM&FW Department has proposed for creation of (3943) posts in TVVP Hospitals under the control of Telangana Vaidya Vidhana Parishad.

Government, after careful examination of the proposal of the HM&FW Department in the reference 2nd read above, hereby accord sanction for creation of the following (3943) posts in TVVP Hospitals under the control of Telangana Vaidya Vidhana Parishad.


The HM&FW Department shall furnish the Direct Recruitment vacancies out of the above sanctioned posts for issue of orders to the concerned recruiting agency so as to notify the same for recruitment.

The HM&FW Department are requested to take necessary further action in the matter accordingly.