GoI Pre matric Scholarships for Minority students 2018 apply online @ scholarships.gov.in . Scholarships offered by the central government to minority students. The Organization said that, Eligible students may apply for the Pre Matric scholarships. The Last date for online applying for scholarship is September 30, and it is required to apply for renewals by September 30. Qualified Minority Students have suggested to apply in the National Scholarship Portal scholarships.gov.in . Application deadline is September 30. Eligibility criteria, How to apply online, Scholorship amount, payment process, required documents to apply, renewal preocess, selection procedure and more details are available in this page. 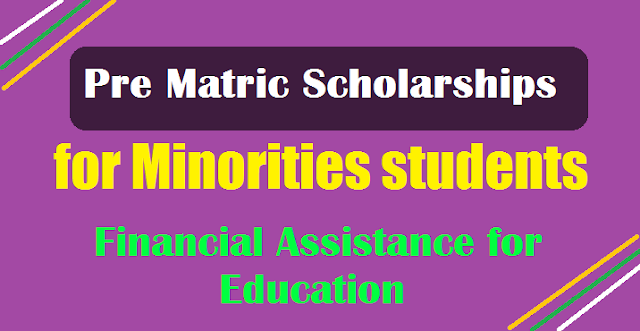 SCHEME OF ‘PRE-MATRIC SCHOLARSHIP’ FOR STUDENTS BELONGING TO THE MINORITY COMMUNITIES FOR 2018-19 1. BACKGROUND
The Prime Minister’s New 15 Point Programme for the Welfare of Minorities was announced in June, 2006. It provides that a Pre-Matric scholarship scheme for meritorious students from minority communities would be implemented.

2. OBJECTIVE
The scholarship at pre-matric level will encourage parents from minority communities to send their school going children to school, lighten their financial burden on school education and sustain their efforts to support their children to complete school education. The scheme will form the foundation for their educational attainment and provide a level playing field in the competitive employment arena. Empowerment through education, which is one of the objectives of this scheme, has the potential to lead to upliftment of the socio economic conditions of the minority communities.

3. SCOPE
The scholarship will be awarded for studies in India in a government or private school from class I to class X, including such residential Government institutes and eligible private institutes selected and notified in a transparent manner by the State Government and Union Territory Administration concerned.

4. ELIGIBILITY
Scholarship will be awarded to the students who have secured not less than 50% marks in the previous final examination and annual income of their parents/guardian from all sources does not exceed Rs. 1.00 lakh.

ii) If the physical target of scholarship for a particular minority community in a state/UT is not utilized, it will be distributed among the same minority community in other States/UTs strictly in accordance with merit and without disturbing the national ratio for the Community. Any unutilized community quota shall be distributed amongst other communities again in accordance with merit and without affecting overall national quota.

iii) A student residing in a particular State/UT will be entitled for scholarship under the quota of that State/UT only irrespective of his/her place of study.

7. SELECTION PROCEDURE
Fresh - As the number of scholarships for minorities available in a year is fixed and limited, it is necessary to lay down preference for selection. Inter-se selection weightage is to be given to poverty rather than marks (the applicant is required to submit an Income Certificate as per para-11(ii)). In case of same income, merit shall be generated from ‘Date of Birth’ criteria of applicant (senior is preferred).

Renewal – There is no merit list generation for renewal cases. Renewal applicant will get the scholarship if one has obtained 50% in his/her previous year’s examinations (at the same Institute and in same course) and his/her application is verified by all authorities (as designated by Ministry of Minority Affairs) and approved by State Governments/UTs.

8. DURATION
The scholarships shall be provided for the entire course. Maintenance allowance will be given as fixed lump sum amount in an academic year (as per para-9 below) for 2017-18 to 2019-20.

9. RATE OF SCHOLARSHIP
Actual financial assistance will be provided for admission/tuition fee and maintenance allowance as given below subject to a maximum ceiling indicated against item concerned.
The details of the scheme interventions for 2017-18 to 2019-20 are as under:

10. IMPLEMENTING AGENCIES:
The scheme is being implemented/funded by Ministry of Minority Affairs through the States/UT’s Administration.

11. CONDITIONS FOR SCHOLARSHIP:
(i) Scholarship will be available to the students of minority community studying in Classes I to X.
(ii) An Income Certificate, issued from a Competent Authority in the State/UT Governments is required in respect of parent/guardian of the student.
(iii) A Self-Certified Community Certificate is required from the student who has attained 18 years of age. For others the Community Certificate certified by parent/guardian of the student is required.
(iv) The continuance of award (for Renewal applicants) will be subject to securing 50% marks in the previous years examination.
(v) Maintenance allowance will be provided to hostellers and day scholars.
(vi) Scholarship will not be given to more than two students from a family (applicable for all Scholarship schemes meant for minorities under this Ministry taken together).
(vii) Students should be regular in attendance for which the yardstick will be decided by the competent authority of the school.
(viii) The school/institute will certify the claim of student of being an outstation student not residing in hostel of the school/institute concerned on the basis of permanent address and parents’ address.
(ix) If a student violates school discipline or any other terms and conditions of the scholarship, scholarship may be suspended or cancelled. The State
Government/Union Territory Administration can also directly cancel the award if duly satisfied of the reasons of violation of these regulations governing the scheme
(x) If a student is found to have obtained a scholarship by false statement, his/her scholarship will be cancelled forthwith and the amount of the scholarship paid will be recovered by the concerned State/UT Govt.
(xi) The course/tuition fees and maintenance allowance will be credited to the student’s bank account directly under Direct Benefit Transfer (DBT) mode.
(xii) The student obtaining benefits under this scheme shall not be allowed to avail of benefits under any other scheme for this purpose.
(xiii) A student shall be eligible for only one scholarship out of all the available Scholarships of Central Government meant for SC/ST/OBC/minority.
(xiv) The amount of Administrative Expenses (@ 1%) for States/UTs in subsequent year shall be released after receiving the Utilization Certificate for the previous years.
(xv) The scheme will be evaluated at regular intervals by the Ministry or any other agency designated by the Ministry and the cost of the evaluation will be borne by the Ministry of Minority Affairs under the provision of the scheme.
(xvi) The State/Union Territory shall place all relevant details of financial and physical achievements on their website.

(xvii) The regulations can be changed at any time at the discretion of the Government of India.

(xviii) It will be necessary for the eligible applicants to provide Aadhaar number while applying for the scholarship and in case, an individual does not possess Aadhaar one can provide the details of alternative identification documents, as stated in the Gazette Notification- S.O. No. 1284 (E) No. 1137, dated 21.04.2017 (as per Appendix-C).

12. ADMINISTRATIVE EXPENSES
As the magnitude of data to be entered and processed would be enormous and the scheme gets implemented over the years, there would be a need to engage qualified

skilled personnel right from the beginning to ensure that the data based computerized systems are operational. Qualified skilled personnel possessing requisite expertise to operate computer programme designed for this purpose, enter, process, analyse, monitor, retrieve and transfer data should be engaged on contract basis as per need.

A provision not exceeding 1% of the total budget will be made to meet the administrative and allied costs viz. expenditure of the States/Union Territories for office equipments including computers and accessories, furniture, printing of application forms, advertisement, engagement of personnel, etc. This provision will also be used for evaluation and monitoring of the scheme, through outside reputed institutions/agencies engaged by the Ministry of Minority Affairs, Government of India or by the State Governments/Union Territory administrations.

13. RENEWAL OF SCHOLARSHIP
The scholarship, once awarded, may be renewed during the next academic year of the course on the production of certificate that the student has secured 50% marks in the previous year’s examination (provided the students pursues the same course and same Institute/School).
.
14. ANNOUNCEMENT OF SCHEME
The scheme will be announced by the concerned State Government/Union Territory Administration well in time, by giving advertisements in the leading language newspapers and local dailies/vernacular and by using other suitable publicity media.

15. MODE OF APPLYING
The scheme is implemented through the National Scholarship Portal (NSP). It is
mandatory for all students to apply online on the website i.e. www.scholarships.gov.in.

16. PATTERN OF FINANCIAL ASSISTANCE
The scheme is Central Sector Scheme and 100% funding is provided by the Ministry of Minority Affairs.

18. EVALUATION
The monitoring of the financial and physical performance of the scheme will be evaluated by assigning evaluation/impact studies to reputed institutions/agencies by the Ministry of Minority Affairs, Government of India.

19. INSTRUCTIONS RELATED TO BANK ACCOUNT DETAILS (to be filled by the students in online application form are as under):
(i) Students must select their bank/branch name carefully from the drop down list.
(ii) Thereafter the complete account no. must be entered correctly. Students are suggested to get their account number verified by their concerned Bank Branch including Bank account number and IFS Code.
(iii) Disclaimer (*If bank details entered by students are found incorrect or not validated by the student’s bank, the scholarship will be canceled/amount
will not be transferred even though the application is approved for scholarship).
(iv) Bank Account holders must check their ‘Know your Customer’ (KYC) status from bank and if required the KYC must be done for successful transaction of scholarship amount.
(v) Bank Account must be operational/active till the scholarship is disbursed.
(vi) Bank Account must be preferably in any scheduled Bank with core banking facility and proper IFS Code.
(vii) Bank Account must be in the name of either the student or a joint account of student with either mother or father or a legal guardian only.

20. MODIFICATION (if any, during 2017-18 to 2019-20) Minor modifications, if any, in the scheme having no financial implications may be made by the Competent Authority in the Ministry of Minority Affairs without seeking recourse to SFC/EFC/Cabinet. However, Ministry of Finance, Department of Expenditure would be consulted.